Hints and tips Gardening calendar Did you know?

July 5-8 sees one of the highlights of the sporting calendar, the Formula 1® 2018 Rolex British Grand Prix weekend at Silverstone.

Hamilton v Vettel, Mercedes v Ferrari; Ricciardo v Verstappen, Red Bull v Red Bull!  With the cars costing millions of pounds to build, and reaching speeds of over 200mph, who wouldn’t want to swap places with the stars of the track, even for just one day? The thrill of the race, the exhilaration of hitting those speeds. Ah, if only.

It all started in a pub

As with so many good ideas, lawnmower racing was born out of a chat with mates over a beer down the local pub. It was 1973, the pub was The Cricketers Arms in Wisborough Green, West Sussex, and the man with the lightbulb moment was motor sports fan and former Ford rally driver, Jim Gavin. Fed up that Formula 1 had become inaccessible and commercialised, Jim and his pals organised a race in a field in the village – and 80 racers turned up with their mowers. A 1923 Atco was among them!

The new sport soon took off and has attracted big name celebrities and motor racing legends, including Sir Stirling Moss, Murray Walker, Chris Evans and Kimi Raikkonen. Sir Stirling, a veteran of 16 Formula 1 victories, won the Lawnmower ‘Grand Prix’ in 1975 and 1976 – there’s a wonderful black-and-white photo from the 1975 race, where an Atco lawnmower is pictured just ahead of him! Sadly, the rights prohibit us using the photo – but you can see it if you do an internet search.

These days, races take place right across the UK, run by the British Lawnmower Racing Association (BLMRA), a non-profit organisation that uses the events to raise money for charity. The biggest event of the year is the 12-Hour Endurance Race which this year takes place near Billinghurst in Sussex on 4 August.

Push or ride, you decide

The first-ever race was for self-propelled, roller-driven mowers – and the spirit lives on in the Group 1 races. Basically, the mowers will go as fast as you can push them!

Group 2 is for cylinder-type roller-driven mowers with a towed seat. The BLMRA reckon that Atco lawnmowers are among the most popular in this group.

Mowers might not be ready to give the likes of Mercedes and Ferrari a run for their money – yet – but lawnmower racing really does bring a whole new meaning to the term ‘grassroots’ sport! 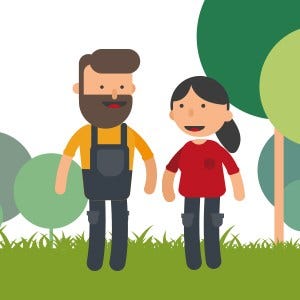 At STIGA, people put passion in any job that has to do with your garden.

Products in this article

How gardening boosts our mental and physical health

What’s new in the world of gardening?